Flutist Cynthia Ellis and Harpist Michelle Temple formed their duo in 2005 out of a shared passion to explore the vibrant and colorful repertory for this instrumental combination.
They have performed recitals for the Placentia Founders Society at the Bradford House, the Newport Beach Public Library, Laguna Beach Live! at the Laguna College of Art and Design, and “Informance” Concerts for the Pacific Symphony Orchestra’s Chamber Music Series, among others.Arioso presents concerts that transform audiences as well as performers. Several of the engaging programs that we have designed are included for your review: The Mystical Canvas, All-American Experience, and Visions of Spring are just a few of our sample concerts.

We enjoy audience interaction and will connect with concertgoers to make your event as personal as possible. Educating the next generation is also part of our mission. Arioso has several concerts tailored to elementary school aged audiences: Feel the Rhythm and Melodic Madness are two thematic concerts programmed especially for our youngest audience members.

Collaborations with living composers provide additional inspiration: The duo commissioned Images Sonnantes with the Les Amis Musicalles Trio, which was composed by James Hopkins and premiered in 2008. This work is inspired by the Debussy Sonate for flute, viola and harp with a decidedly twentieth century twist and is scored for flute, violin, viola and harp. 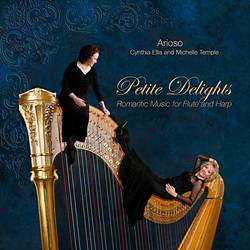 New CD Release:  Petite Delights: Romantic Music for Flute & Harp
Petite Delights: Romantic Music for Flute and Harp, released May 2016, features flutist Cynthia Ellis and harpist   Michelle Temple. Cynthia Ellis is the solo piccolo player with the Pacific Symphony Orchestra, and served as   Principal Flute for the Opera Pacific Orchestra between the years 1995 and 2009. Michelle Temple is also a member   of the Pacific Symphony Orchestra, and has been since 1994. She has also been principal harp with the Santa   Barbara Symphony since 1991. For this program, the duo has chosen pieces from Debussy, Gaubert, Glinka, Saint-   Saens, Ravel, Ibert, and more. 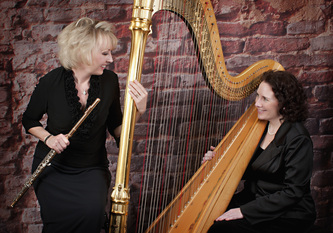 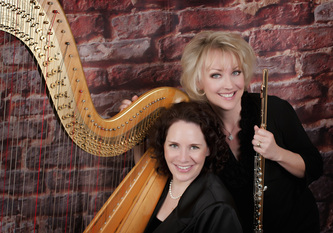 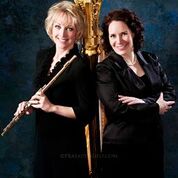 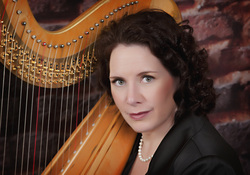 Her many ballet orchestra credits include the American Ballet Theater, Joffrey Ballet, Royal Ballet of London, and the Bolshoi Ballet. Ms. Temple has shared the stage with some of opera’s brightest stars, including Jose Carreras, Sumi Jo, Frederica von Stade, Denyce Graves, Kiri Te Kanawa, and Patricia Racette. With the LA Opera Orchestra, she has appeared in numerous productions featuring Placido Domingo.

She has recorded with Pacific Symphony, the Hollywood Bowl Orchestra, the Santa Barbara Symphony, and can also be heard on the Los Angeles Master Chorale’s “Christmas” CD, and Frank Sinatra’s “Duets”.