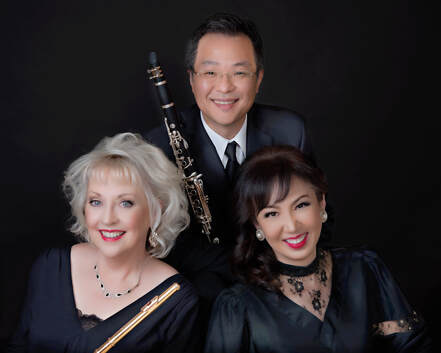 ​Formed in 2018 out of a mutual love for chamber music, Cynthia Ellis, flute, David Chang, clarinet and Jung-A Lee, piano are Synergy.

Both David and Cynthia are musicians with the Pacific Symphony Orchestra, and Jung-A Lee frequently performs with the symphony at the Renee and Henry Segerstrom Concert Hall on organ, harpsichord and piano.
Cynthia Ellis has been a member of the award winning trio Les Amis Musicalles, winner of the National Flute Association Chamber Music competition in 2000. She has recorded several CD’s of chamber music on the Centaur Label.

David Chang has studied at USC, the Curtis Institute of Music and Temple University where he received his Master of Music degree. He has performed with the Pittsburgh Symphony, Philadelphia Orchestra, and National Symphony and toured Japan performing chamber music with principals of the Vienna Philharmonic Orchestra.

Jung-A Lee received her DMA from Boston University and in addition to serving on the faculties of Vanguard University and Biola University has given recitals in churches and concert halls all over the world including Italy, Germany, United Kingdom, Hungary, Slovakia, Canada, China and South Korea. Her concert schedule this year includes international recitals in France, Belgium, England and the Netherlands. Visit her website at musicmissioninternational.org